Do you need us to pick you up? 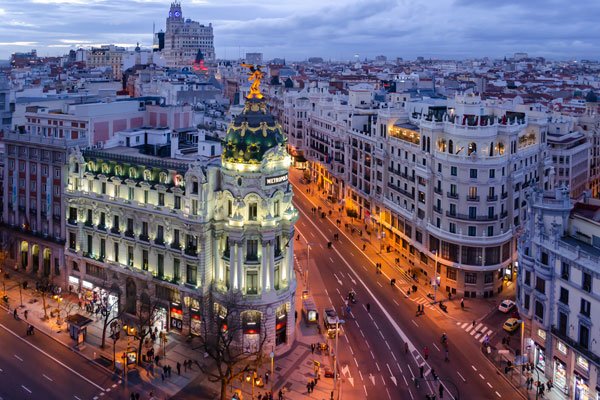 Gran Via Madrid: what to do and where to stay

Gran Via Madrid is a spectacle, both for world travellers and local Madrid residents. The area is obviously a must visit when coming to Madrid, the capital city of Spain, and it is also home to a huge range of incredible activities. Take your notebook out and start jotting down the following plans!

Film night in Madrid Gran Via

As well as being home to numerous shops, Madrid’s Gran Via is also filled with various charming cinemas. They are all incredible, however, among the most famous ones you’ll find Cines Capitol, where they play the films in Spanish, and Cine Renoir Princesa, where they do show the films in their original version.

Shopping in Gran Via is a must!

You have probably heard about this already, but visiting Madrid’s Gran Via and not buying anything is almost a sin. You can find all sorts of stores in the Gran Via, for all tastes, ages and budget. The avenue, of about 1.300 metres long, is home to renowned international shops and brands such as Lacoste, LOEWE, Dior, Camper or Carolina Herrera, as well as others like Zara, Primark and Aristocrazy.

For many, the Gran Via in Madrid is almost like an open-air shopping centre, although it is also home to a very well-known department store: El Corte Inglés. In this latter one, you can find a vast range of exclusive fashion, beauty and home decor brands, as well as a supermarket.

Fancy watching a show in Gran Via?

Going to the Madrid Gran Via is almost like entering a new Spanish Broadway. The place is bursting with numerous theatres, each one holding its own charm and specialising on a certain type of entertainment show.

Right in the Gran Via you can visit the old Teatro Lope de Vega theatre, built between 1946 and 1947 and home to famous shows and musicals such as The Lion King. Furthermore, the Teatro Gran Vía is also another “celebrity” there, where they play shows such as GHOST, while the Teatro Rialto offers concerts and shows such as the Michael Jackson Tribute Musical.

For those who love a bit of comedy and know a fair amount of Spanish, don’t miss out on a visit to the popular “Chocita del Loro”. There, they host a whole range of magic or stand-up comedy shows such as the “Lobo de Gran Vía” (The Wolf of Gran Via).

Take in the architectural scene

Gran Via Madrid offers an infinite number of tours to route around the capital city and discover its beauty and history. The Gran Via in itself is already a must in Madrid, but nearby you’ll also find famous landmarks such as the Plaza España, the symbolic Metrópolis building or the Telefónica one. When touring around the area, don’t forget to also visit the Calle Princesa, Bailén street and other impressive historic monuments such as the “Monasterio de Las Descalzas Reales” monastery, a true wonder of Renaissance architecture.

Hotel in Gran Via Madrid

To fully enjoy all these plans comfortably and stress-free, our best recommendation is to choose a quality hotel in the area, and where better than right in the heart of the Gran Via in Madrid?

In L&H Hotels we have a great selection of hotels, one of them right in the heart of the Gran Via: L&H Gran Via Selection. It is a modern and urban hotel with exquisitely designed rooms. Located just 100 metres away from the famous Gran Via in Madrid, it is also right by the Puerta del Sol, the Chueca neighbourhood and other musts.

Staying in L&H Gran Via Selection you’ll feel part of the city, not just like any other tourist. If you want to live your experience in Madrid to the fullest and get to know it intimately, this is your best option. Hope to see you soon around Gran Via Madrid!